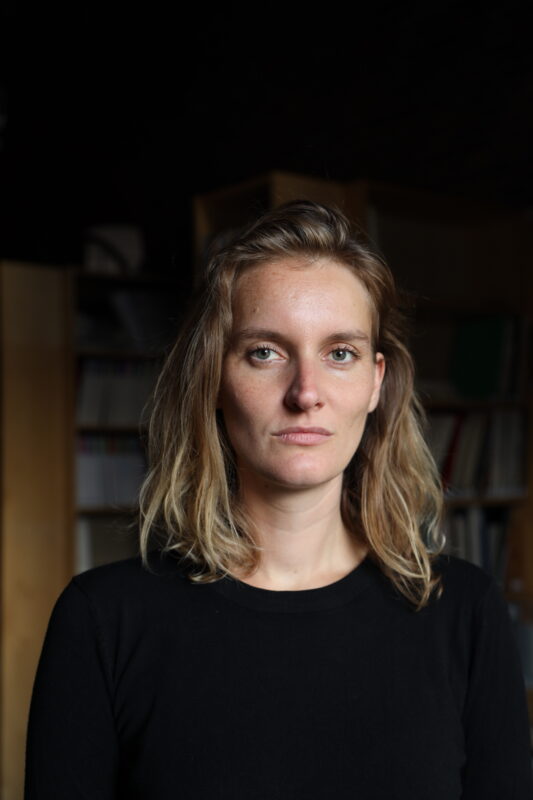 Together with her twin sister Natasja, Melissa grew up in a farm in the Netherlands, where they spent their time daydreaming, drawing, horse riding and working on the field. She learned that the work could never be finished at a farm, and that she wanted to create her own ‘work’. After an introduction to Philosophy at Ghent University, she studied Visual Art at KASK, Ghent.

In her individual practice, Melissa discovers various text forms and performance styles. She explores the boundaries between the public and the private, the banal as a political entity in philosophical and humorous (video)sketches, spatial poems, performative letters at a.o. OT301 (Amsterdam), Sale Docks (Venice), M HKA, Verbeke Foundation, and nY magazine. She performed for Dora Garcia, Assaf Grubern Lies Pauwels & NTGent, and collaborated to the discussion performances of Peter Aers as a performer, scenographer and co-creator.

Melissa is part of Engagement, a movement that tackles sexual harassment, sexism and power abuse in the arts.

Since 2012, Melissa has been working closely together with Oshin Albrecht as ‘neighbours’. With their work, they channel humorous, imaginative and critical realities with a strong visual and musical drive. Through performance, video, text, objects, songs, photography and installation, they navigate through ideas of community, domesticity, gender, (art) history, power relations and neoliberal fantasies. They made their first film, Parkways, during the Bijlm-Air residency in Amsterdam, obtained a postgraduate at the HISK and published Confusion of Tongues by Posture Editions.

In May 2019, a three-day programme took place in Vooruit (now 404) that was focused on the different aspects of their practice. Their cross-over practice is exhibited in both visual arts as in theatre related contexts such as STUK, Vooruit (404), Pukkelpop, de Brakke Grond, Netwerk Aalst, Galery Am Polylog, Z33, Gouvernement, Buda, Beursschouwburg, Casco, Tatjana Pieters, Veem House for Performance and Theater aan Zee. From 2020 until 2024, ‘neighbours’ is part of the European Network Apap – Feminist Futures via Buda. This autumn, they will release a publication with publisher ‘het balanseer’ and from 2023 onwards they will be one of the three house residents at Kaaitheater.